The week.  It’s that time of year when I ask my wife for an advance on all the good will of Father’s Day and my next birthday combined, aiming to eschew all fatherly responsibilities for four afternoons when I will retreat to my golficce to sit with laptop propped open on my gut, phone tuned to Twitter, and the TV singing CBS as images of Georgia short grass fill the room with a green glow.  With a Ballpark Blueprints map of the Augusta National hanging behind my head and scorecards from an erstwhile round in 2015 sprinkled across the coffee table before me, I become a golf sponge and forget that a world beyond the Masters actually exists.  There will be knocks at the door and pleas to come figure out how to work the Netflix on the TV downstairs, but on these four days I will invoke the annual pass known to golf-writing dads the world over as we watch every chip and swat, licking pimento cheese spread from our fingertips and remaining glued to our vocation:  Sorry, honey.  Have to watch this.  Daddy’s working.

The intensity of the upcoming Thursday-through-Sunday research is only ratcheted higher by having some skin in the game.  These practice round days are busy with glimpses at the Golf Channel as I sift through golf click-bait in search of insiders’ scoops on the best horse in the race.  My own insights into the hottest hands at Augusta come from the outermost ring of insider status, but lest one of my horses come in on Sunday, I will put forth my Masters picks here for what they are worth, which is roughly the price of pimento cheese on white bread.

Dustin Johnson is the easy pick, and a healthy favorite.  No one has looked this dominant coming into Augusta since days of Tiger glory, but I’m reluctant to take the chalk here.  It seems too easy, and easy bets always end up being expensive.  Besides, where’s the adventure in pulling for the guy everyone said would win?

I don’t like the way Spieth played in Houston last week–could memories of the back nine at Augusta have already been haunting him from across the Gulf?  I think he contends, but my guess is that he needs a little more space between last April’s scuba party and his next green jacket.  Plus, I can’t pull for slow players.

God bless Jason Day and what he’s going through with his mother’s illness.  It would be a great story, and I will be pulling for him (slow play aside) if he’s in contention, as will all the world, I imagine.  But he’s probably got too much going on right now to put all the pieces together on this particular week.

The golf world is all aflutter with its crush on the bold and bombing Spaniard Jon Rahm right now, and I’m among them, but I’m going with the trend here and saying a rookie won’t win (it’s only happened once in eight-one years).  This weeds out a promising slice of the field, including canuck Adam Hadwin, Swede Alex Noren, Englishman Tyrrell Hatton (who just has too many double-consonants for one name), and Belgian-hopped Thomas Pieters who are all showing up on pundits’ sleeper picks lists.

I don’t see Danny Willett repeating.  His game post-Masters 2016 has been modest, and it’s been a weird year for him since the Ryder Cup.  Though his champions dinner menu looks stick-to-your-ribs delicious.

Bubba is just too Bubba to pull for.  Patrick Reed doesn’t seem to be at his sharpest right now, and the home decor showcased in his Feherty interview (’twas a trip down the rabbit hole to the Mad Hatter’s cafe) crossed him off my list.  Sergio has had a go 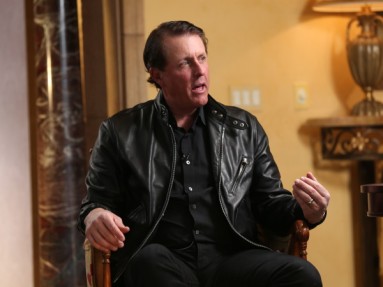 od year but this recent wipeout gives me pause, as well as hope that I can hit it just like a tour player.  I think Rickie puts up a couple exciting numbers but doesn’t close the deal.  Phil has been too wild lately–he might be the most fun to watch this weekend, but I think he’s got his jackets and will be all-in on Erin Hills this year.  (His Feherty Fonzie look also set him back a few pages in my book of fandom.)

It’s easy to cross names off a list–much harder to select them.  They are calling for iffy weather in Augusta this week (lots of rain before the tournament, then big winds Thursday and Friday) which has me looking for an aerodynamic mudder.  I want to take Scotsman Russell Knox, but he’s been off his form recently. Matsuyama has been on fire this year, but I’m going to say the conditions don’t suit him, with absolutely no good reason for saying so.

I think that as much as he says that he does not like playing in the slop, Rory has had some big wins in poor conditions.  I think the wind helps him, brings him back to former days of knocking it down along the old sod, and I just feel like he’s due.  His Augusta demons are exorcised, he’s playing well, and he’s just ever so slightly under the radar post his injury, with all the hype hoisted onto Dustin Johnson’s shoulders.

Kuchar and Snedeker will hang around, and Daniel Berger might be the young horse to jump out to an early lead, but I’m going with Rory McIlroy as my not-so-long shot.  So you read all that for me to pick the #2 player in the world.  Sorry, but last year, Willett come from off the map, so I’m feeling like this year we do get a favorite (Rory is third shortest odds at 8/1).  If I was going to back a Rory wager with a few value bets, I also have eyes for Justin Rose (30/1), Marc Leishman (65/1), and Loius Oosthuizen (55/1).  It’s fun to chase players with odds over 100/1, and Gary Woodland and Shane Lowry might catch your attention at those payoffs, but I want to invest in a player (for amusement purposes only, of course) who gives me a safe-ish chance of a rooting cause come Sunday.  I would love to bet on Freddy Couples, but when it’s discovered your player missed the cut on Friday, the weekend chores suddenly come knocking at the door.

Meet Me at the Mull

Of Birds and Bogeymen