I have taken some deserved guff from indignant linksters for saying that there are no true links golf courses in my home country.  I know I should have been saying that there were no genuine links, but I have not been to Bandon yet, nor have I sampled the nine-holer on Cape Cod, both regarded as genuine North American links.  And the golfing curmudgeon in me kind of liked saying that you have to travel to the British Isles to play a real links, and I still sort of believed it–until today.

The defining characteristic of a links course is that it’s laid upon dunes, but there is more to the experience–history, accents, foreign dishes and strange currency–that make a links expedition feel like just that–an expedition, an adventure to elsewhere.  The golf transports, but so does all the other stuff, and today I learned that all that good other stuff can be found in North America, whether I like it or not.  And I do like it.  Very much.

(Before I go too far, I should note that this blog has gone dormant for good reason, and that it has to do with the answer to the question I’ve been hearing from friends and readers lately–WHERE THE HELL IS YOUR SCOTLAND BOOK?  I’m very pleased to say here that it’s done.  Well, done in the way that my kids say their dinners are done; there’s still plenty of work left on the plate.  The first draft is complete, but months of editing and polishing await.  My fingers are crossed for a release date around Father’s Day next year, but that is as unconfirmed as unconfirmed gets.)

As I worked my way through the final chapters of A Course Called the Kingdom, I found myself seeking a links refresher, a reminder of what it was that had me playing 110 rounds in 57 days and wishing for another week.  I had heard of Cabot but thought it a cheese; not until news hit my inbox of a new course opening up beside the Cabot Links did I figure out where Cabot was (Nova Scotia), and that it was a true North American links (the only one in Canada).  I began planning a summer pilgrimage.  My wife and kids would love a little city escape to the cooler July of Cape Breton, and some sightseeing around the Cabot Trail would be the stuff of forever family memories.  Then we decided to build a new house and move this summer, and our vacation plans were scrapped in the name of prudence and what’s best for the family.

So I went without them.  Come on, it was a links.  Just two hours away.  I had far more selfish and poorly-timed boondoggles under my belt; 48 hours in Nova Scotia would hardly register on the your husband is doing what? scale.  And once I learned that Nova Scotia translates to New Scotland just as the pages were piling up on my Scotland book, the trip became an inevitability. Plus, my wife is a rock star, in case you haven’t already come to that conclusion. 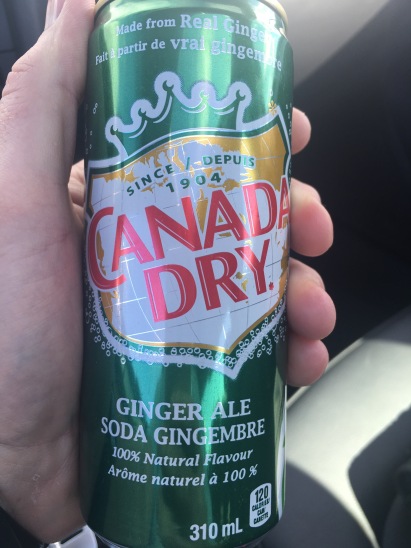 On my drive in from Halifax, I found the eastern Canadian isle of Cape Breton dotted with Scottish place names.  Nova Scotia had been settled by Scots, and when I arrived in wee Inverness on the Cape’s western coast, I discovered a golfing heaven named after the explorer who found the island–John Cabot, whose ship the Matthew serves as the resort’s logo  (I wondered if some savvy marketer renamed the town Inverness to attract golfers, but the name far outdated the golf courses). 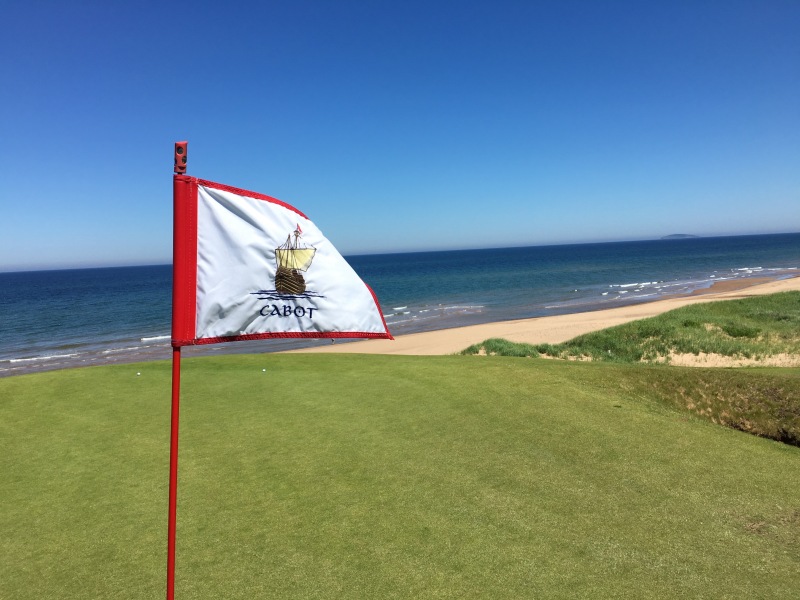 Calling Cabot a resort is a bit of a disservice to what makes Cabot so extraordinary.  It’s more of a golf hub, or a golfer’s retreat.  The place is efficiently perfect–no sprawling hotel or pool bars or day spas.  There are a few low-profile buildings, each holding a dozen or so golf-appointed guest rooms (with golf-shoe-friendly carpet, golf art, golf quotes painted on each door, and do-not-disturb hangers that tell passers-by that you are busy working on your swing).  Good pro shop, small reception desk, two restaurants, patio dining beside 18 green and a golf pub on the hill (where I ate my first poutine, fries smothered in gravy and melted cheese curds that changed my whole outlook on what Canada had to offer me as someone who only partly followed hockey anymore)–it is a simple and easy-going destination that is four-star in an understated way.  The service is island-friendly, the locals happy you are there to share their rare corner of the world.  It is the golf resort I would design if I ever had the chance–user-friendly, unpretentious, and a place where absolutely nothing overshadows the golf course.

It would be impossible to overshadow a course like the Cabot Links, and they know it–they don’t let you take your eyes off it at Cabot, where every window on the property overlooks the course, much like every hole on the golf course overlooks the ocean (eighteen water views is not guaranteed on a links course, but with the addition of the new Cabot Cliffs track up the road, Cabot boasts 36 holes with ocean breakers in view).

The Cabot Links is just that–a true sandy links packed with vistas and postcard shots, and as good a test as the top links of the UK and Ireland.  And the new Cabot Cliffs, designed by Coore/Crenshaw and just officially opened in June, is a beast of a cliffside track.  Every hole is dripping with drama and the closing stretch along the rocks is the closest thing I’ve experienced to Old Head outside of Kinsale.

Great people, stunning golf, and everything made effortless–aside from the tee shots on the Cliffs course.  They required concerted effort.  (My caddy is still out there looking for some of mine.  A native of Cape Breton where a version of Scots Gaelic is still spoken among the locals, his accent was a cool mix of Irish, Scottish, and Canadian twang.  Really nice kid.  I hope he makes it back okay.) 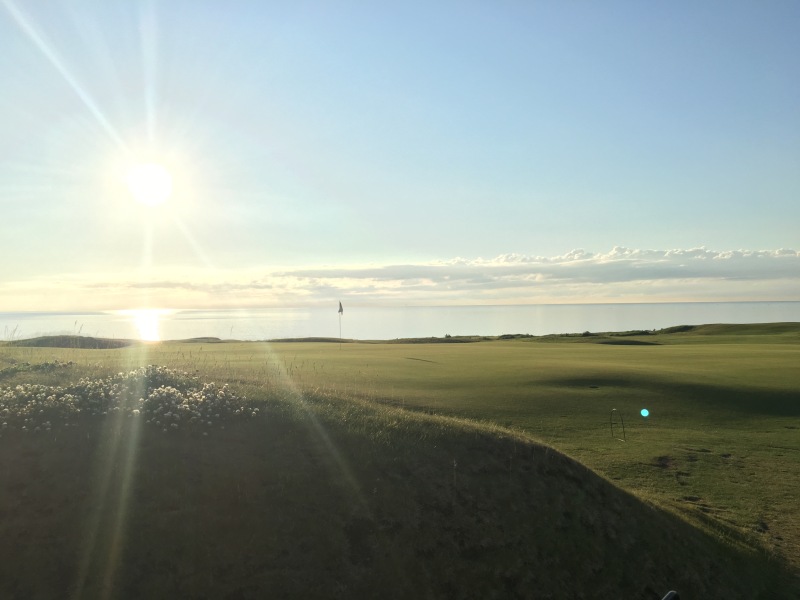 I will always hear and heed the call back to Scotland, but with a flight shorter than going to Florida, a soft Canadian dollar, and two courses I could play for a month without getting bored, New Scotland is going to be tough to fly over.

6 thoughts on “Something’s Up Up There”

Last Call for the Cup