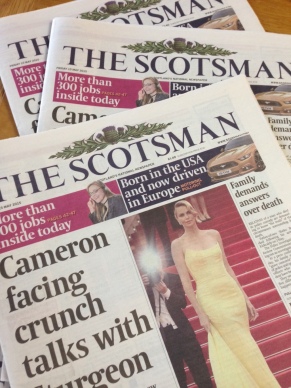 I wasn’t five minutes into explaining my British Open ambitions to Scottish golf writer Martin Dempster before I fired a hozel-rocket into the weeds of the Crail Golfing Society.  In our morning on-course interview, the first golf shot I showed him was a hard pitch-out into the gorse.  I feared for my Scottish newspaper debut, and as I got it to two-under in the afternoon on the Balcomie Links, long after the interview had ended, I nearly texted Martin: STOP THE PRESSES, I can actually play!  But then I bogeyed the final three holes (two three-putts, ooof) and figured I deserved whatever was coming to me in the paper.  Martin was kind enough to look past my shank (even though it does make an appearance in the story — deservedly so) and wrote a generous piece in The Scotsman today.  And in case it isn’t obvious enough that it’s awesome having my family here, after Maggie saw my picture in the paper, she noted that Mommy was there on the cover.  Kids rule.

So I’ll let Martin write the update today — it’s dinnertime in St. Andrews, and I have to go get fish n chips for the family. (One of the many reasons I love Scotland: The difference between the fish and the fish supper at the local take-away is a hulking pile of chips.  Fried potato=meal.)

8 thoughts on “A Scotsman”

A Year in a Fortnight